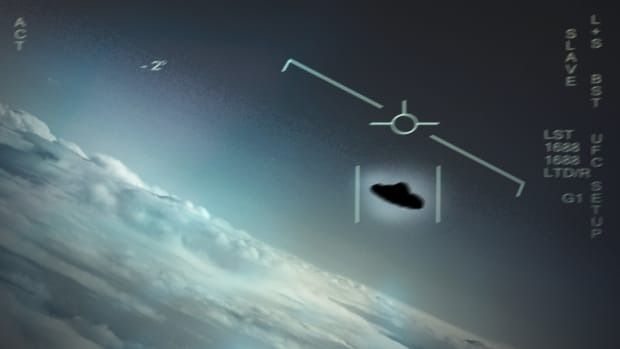 Washington, DC -UPI- The U.S. military's question of how Unidentified Aerial Phenomena (UAP) cavort in the skies while ignoring Newton's laws in outpacing the latest jet fighters, may be solved.

Independent Cuban researcher, Vincente Simmonsiera, working from his small, humble, study outside Havana, has postulated the following thesis in a paper delivered on May 17 to the Langley, VA chapter of MUFON (Mutual UFO Network).

"They're (ET's) using a piece of heavy matter say from a neutron star or black hole as the center of their propulsion system. It's something like that, that humans don't yet have access to.

There's no way we can replicate that technology without the appropriate material. Heavy matter is strong enough to create a gravitational pull that is equal to that of earth thereby cancelling the affect of earth's gravity by pulling in the opposite direction. The matter is also compact enough to place in the center of the craft which keeps the occupants in place so they aren't smashed with g-forces the way they move. It's like they created a mini planet that holds them and the structure of the craft together as it moves around just as earth holds us in place as it spins at 1,000 miles per hour at the equator.

There is nothing emitted from the craft that affects the environment like fuel exhaust or radiation pollution. No external electrical charge as they are able to dive into the oceans at will. It seems their outer hull is inert, but they do emit heat. Whatever nuclear process is going on internally is generating substantial heat that they effectively radiate to the outside of the craft without heat fins.

In some cases the hull of the craft seems to be incredibly thick and heavy as there have been reports of craft smashing into a small plane over the Gulf of Mexico, perhaps by accident, but totaling destroying the plane and killing the pilot. Also I saw a video clip of in Russia where a UFO smashed through a meteorite breaking it up before it could impact and cause damage. The UFO continued on like a bullet.

These reports indicate the hull is made of some super heavy and thick material. Maybe the body of the craft are made of this nuclear material and somehow they are able to steer it and at various speeds by a method known only to them. This would indicate the craft are super heavy as opposed to man made craft that try to be as light as possible since we use liquid propellants or glide on air. The heaviness of the craft is part of it's nuclear fabric and ability. Just because everything we make tends to aim for lightness doesn't mean they do. Just my thinking. We'll probably never know anyway."

A seasoned MUFON official who requests anonymity, stated that Mr. Simmonsiera may not only be holding the key to alien technology in his continuing work, but that the odds are high that the 'independent research scientist' may be an alien himself.

Having met Mr. Simmonsiera briefly, this reporter must go on the record as being in agreement with the MUFON official.