Ariana Grande comes out as BISEXUAL?! 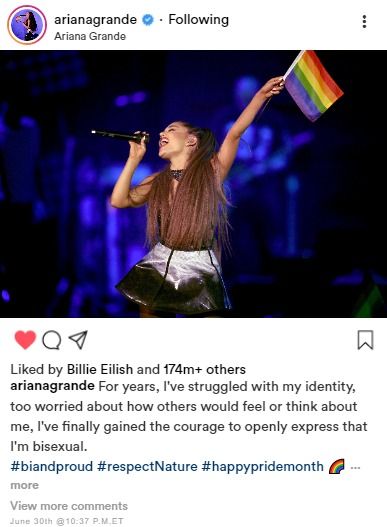 Taking part in the "Post a pic of..." trend that took over Instagram stories back on the last day of June when Pride months was in session, celebrity singer-songwriter Ariana Grande (Ariana Grande is a sitcom-star-turned-pop music sensation, known for such hit songs as "Problem," "Bang Bang," "Dangerous Woman" and "Thank U, Next.") publicly came out as bisexual after sharing a selfie with the caption "Hi, I’m bi and proud!" when asked by a fan to post a pic that gave off a "gay/bi vibe." "For years, I've struggled with my identity, too worried about how others would feel or think about me," Grande wrote in her post. "I've finally gained the courage to openly express that I'm bisexual."