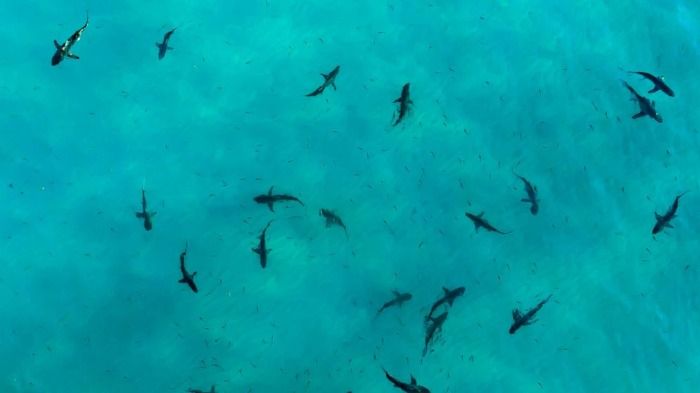 A girl and her friends traveled to a Florida beach for their college Spring Break in 2001. The girls checked into their AirBnb around 10am and then decided to pack up their beach bags and head straight to the white sand and clear, blue waters. After setting up their chairs, a paddle-board rental station caught their eye. Two of the girls decided they wanted to paddle-board right away and rented a paddle-board for an hour. During that hour, they paddled out as far as they could go and realized they were too far from shore and started to get worried. The girls decided it might be a good idea to turn around and head back to shore and as they were on their way back, they noticed it looked like it was raining but no cloud in the sky. Shortly after, they noticed birds diving into the waters and fish jumping. This became a total concern and worry. They came to conclusion they were in a large feeding frenzy and as they looked below them, they felt a sigh of relief due to the fact of dolphins appearing. The girls then wanted to swim with the dolphins because they saw it as a once in a lifetime experience and they had to go for it. After they dove into the water and got a closer look, they quickly realized that what they thought appeared to be dolphin were actually sharks. The girls panicked and tried to get back up on the board as quick as possible but it was too late, a shark had already gotten ahold of one of the girls legs and took her far beneath the surface. After the other friend made it back on the board she frantically waited for her friend to come back up so she could help her back onto the board but after about 5 minutes of waiting the girl could only see a red pool of blood. The exciting vacation shortly became a devastating nightmare.